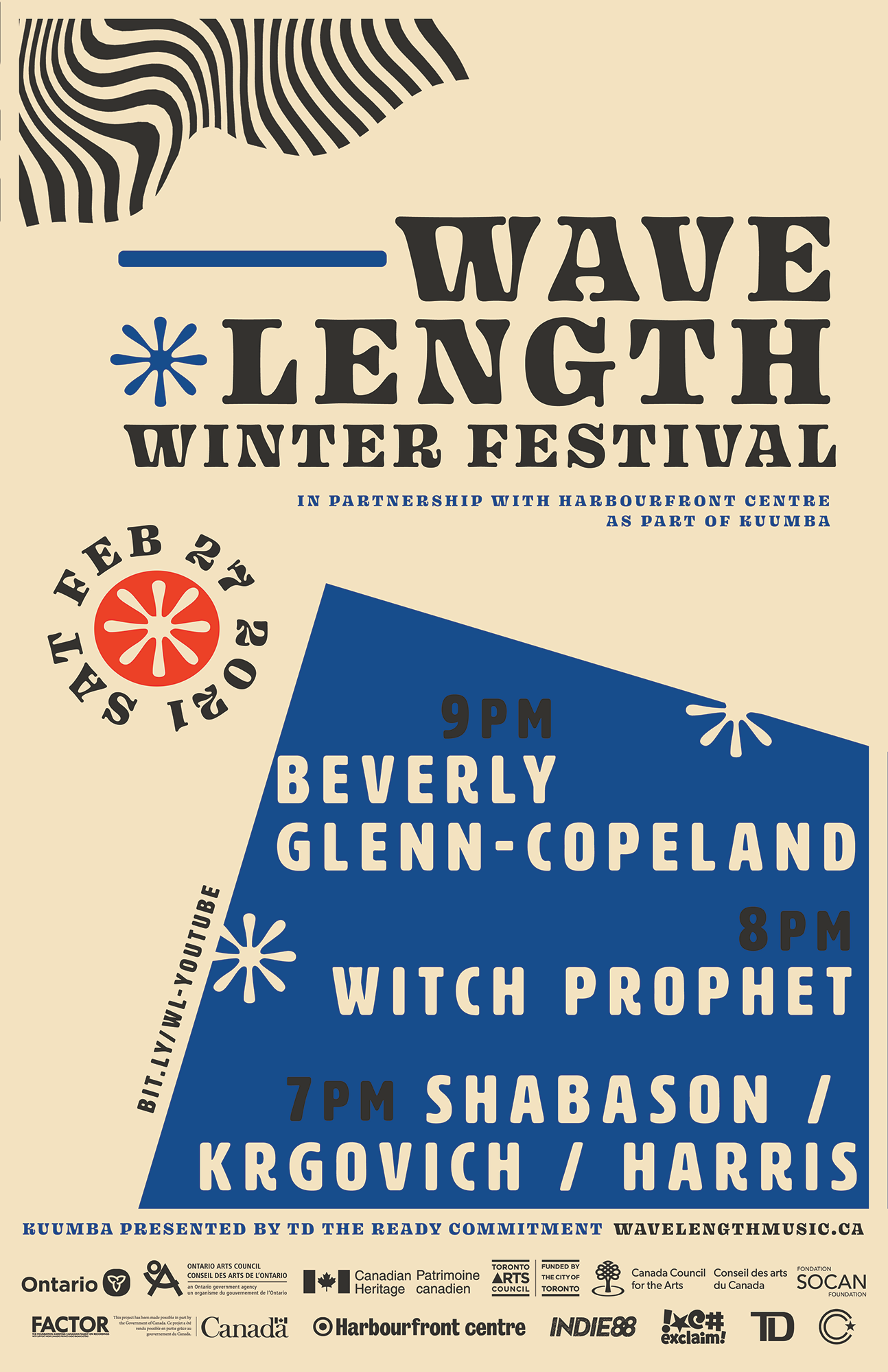 Save the month! 4 shows, one each Saturday evening!

Welcome to the fourth Saturday and finale of our month-long Winter Festival! This Saturday’s finale is filled with groove. Starting with the new age art-pop trio Shabason, Krgovich & Harris, moving into the trio-hop sounds from 2020 Polaris Prize short-listed Witch Prophet, then ending with the legendary Canadian composer and songwriter Beverly Glenn-Copeland.

Streaming from Harbourfront Centre + mystery spaces, we hope that this year’s festival finale brings you the strength of hope and optimism in the future that awaits us all. Let’s work to being kind to ourselves and to each other.

Beverly Glenn Copeland is a Canadian music legend. During his lifetime thus far, Glenn has written a large body of music for adults, music for film, musicals for children, and recorded six albums of his songs. His compositions have been performed by various Canadian artists including Rita MacNeil and Jackie Richardson. He also had the wonderful opportunity to spend 25 years entertaining kids as a regular actor on the Mr. Dress-Up Show. After many years of absence from the concert stage, Glenn has resumed performing with his new band, Indigo Rising, in Canada and Europe. With great joy and appreciation Glenn acknowledges his deep connection with the younger generations that are now so  enthusiastically embracing his music!

Witch Prophet is a queer, Ethiopian/Eritrean singer-songwriter based in Toronto. She provides her fans with a soundscape of vocal layers, loops, raps, and harmonies on a bed of hip-hop, jazz, and soul-inspired beats. Think Erykah Badu meets Lauryn Hill meets Jill Scott. Her EPs H.P.B. and Architect of Heartbreak Remixes were met with great praise when released in 2016 and 2017, as was her highly anticipated album The Golden Octave, released via her own label Heart Lake Records in 2018. In March of 2020, Witch Prophet released her Ontario Arts Council funded  sophomore LP DNA Activation, an ode to her Ethiopian and Eritrean ancestral  roots, fusing jazz, hip-hop, soul and R&B, with songs sung in English, Amharic,  and Tigrinya. Co-produced by herself and her partner Sun Sun, and praised by press and music lovers alike, DNA Activation was shortlisted for the 2020 Polaris Music Prize.

Shabason, Krgovich & Harris who convened on a shared love of New Age music, create a space of sonic refuge out of softly electrified textures, burbling live instrumentation, and Shabason’s lacquered synth work, all of which support Krgovich’s koan-like poetry about showers before bed, dusty minivans, sips of gatorade, and the modern minutiae rendered beautiful by mere observation.