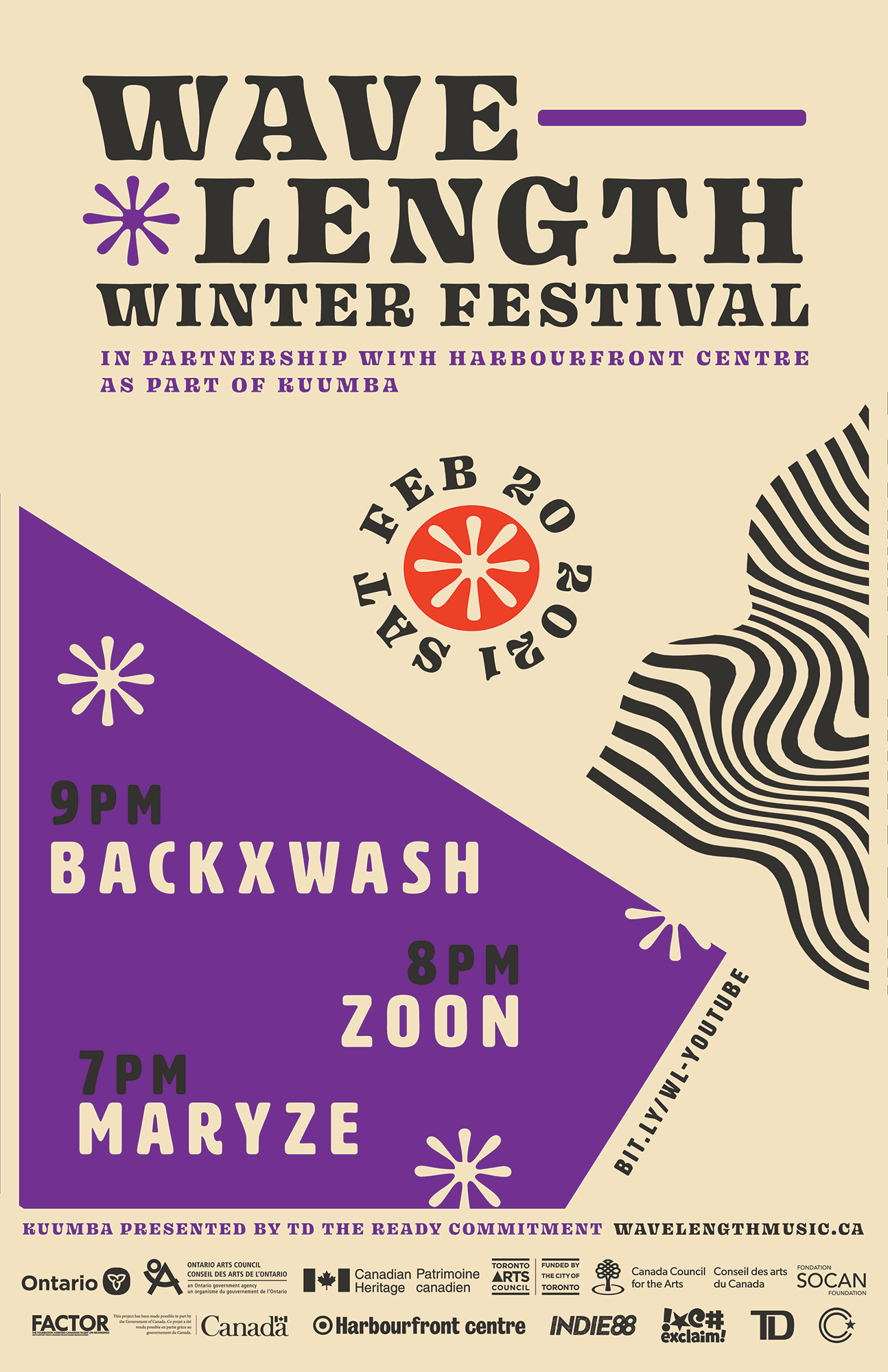 Save the month! 4 shows, one each Saturday evening!

Welcome to the third Saturday of our month-long Winter Festival! This week’s online concert is set to carry you across a slew of sonic realms. We’re going to start in the electro-pop realm with Maryze, then to the swoony shoegaze noise-pop world of Zoon, then to the metallic rapper/producer AND 2020 Polaris Music Prize winner BACKXWASH. Pack your bags because this is one hell of a trip to go on!

Streaming from La Sotterenea in Montreal and mystery music spots, this show is worth inviting all of your friends to “hangout” at.

“Although chances are that you may have first heard of Backxwash from the many music critic co-signs, culminating in her Polaris Music Prize win in October 2020, no one deserves credit for the success of God Has Nothing to Do with This Leave Him Out of It but the rapper-producer herself. Across a scant 22 minutes, the Montreal-based/Zambia-born musician manages to pull together a hefty and unlikely range of sounds, influences and moods, coming off compellingly dark and gothic on “Into the Void,” expertly melding a Black Sabbath sample into the album’s potent title track, and sharing the spotlight with a variety of expertly curated guest stars. God Has Nothing to Do with This is a sonically raw, emotionally honest and starkly creative piece of art that completely blows minds, challenges how we think about the art of hip-hop, and — most importantly — stands on its own merit.” — Daniel Sylvester, Exclaim (album of the year)

In the Ojibway language, the word Zoongide’ewin means “bravery, courage, the Bear Spirit.” It’s no wonder Daniel Monkman adopted Zoon as his musical moniker. The Hamilton-based musician has spent the better part of his 28 years finding and channelling his strength to overcome such adversities as racism, poverty and addiction. Music saved Monkman’s life. And, on Zoon’s debut album, Bleached Wavves, he paints a message of hope and fortitude, lessons he learned studying the Seven Grandfather teachings after experiencing the lowest point of his life. Bleached Wavves is the first true document of what has been dubbed “moccasin-gaze,” a tongue-in-cheek nickname for the amalgamation of Monkman’s shoegaze influences with traditional First Nations music. Like My Bloody Valentine’s Loveless, a record that changed everything for him, Zoon pushes forward that famously quixotic, effects-laden sound with a distinctive, new approach.

Maryze is a bilingual alt-pop artist based in Montreal originally from Vancouver. Her stormy-sweet world blends haunting introspective lyrics with contagious beats offering a refreshing voice with fiery honesty.